Best Jazz Album of All Time?

I had heard of Edward Kennedy "Duke" Ellington since high school or earlier. Our band director, Jack Dahlinger, went out of his way to educate through playing the greats and inviting them to perform in our civic auditorium in Alexandria, Va. I heard Count Basie, Lionel Hampton, Duke Ellington and various other players in this venue. The Duke also is remembered through the Duke Ellington School of the Arts and Duke Ellington Bridge in Washington, DC, locations I was aware of by virtue of travel in this city.

But in my post-high school listening, I had not spent quality time with the Duke's recordings. Obviously, "Take the A Train," and perhaps a few others. That all changed recently, when my preferred digital download service HDTracks featured a 1963 collection called "Take the A Train," with a high quality reproduction that was impressively modern in its sound. Now I was on the hunt for other earphone friendly recordings and the search spread to online reseller Discogs.

The Duke Ellington Orchestra performed at the American Jazz Festival in Newport, Rhode Island in July, 1956. This performance is concurrently famous, infamous and incredibly restored. Famous because of the musicianship and performances; infamous because of the deception foisted on the public for many years that the released recording was of "live" performances; and incredibly restored after a Voice of America recording was used to piece together a complete version of the live event. The Duke had felt that the performance was not up to snuff and brought the group back into the studio to recreate the music. This re-creation was sold on vinyl for many years until the VoA tapes were found and used to digitally stitch together a stereo rendition of the "live" performance: Columbia/Legacy 88697492052 Ellington at Newport 1956 (Complete). 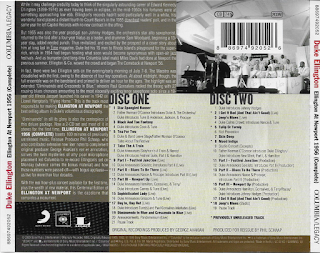 Ellington at Newport marked a significant upturn in the group's popularity. If you listen to the recording it will be immediately apparent why. Observers reported that a near riot occurred during moments of the festival, which may have simply been overjoyed listeners. This career upswing (heh) lasted for several decades. Happy listening!
Posted by Chip Gallo at 5:41 AM No comments: