Willis, Tony and Me

These guys Willis Nowell and Tony Barther were hanging around on a forum at Shannondale.TV in the early 2000's when I first ran into them online.  This was before Shannondale & Beyond existed. My employer at the time had a server which I offered as a location to host the first S&B forum and thus I was the de facto system support person. This arrangement was fine when the server was in a colocation (run from Greenbelt, Md. by Allen Hoffman) but when it was moved to a residence, access to S&B from the internet became tenuous and Tony found paid hosting elsewhere.

What Willis and Tony tried to do was moderate the forum discussions with a fairly high degree of granularity. They and the other moderators, myself included at some times, developed categorizations for the forum areas that characterized the potential for reader upset. These ranged from "General," which would be suitable for all readers to "Thunderdome," containing inflammatory content. I contributed the thunderdome moniker which was suggested by the Mel Gibson film of the same name.

Willis also was a patron of exploration by air, in our case over Jefferson County, WV. I flew three times at his behest as photographer, with one of the forum members as pilot. Here are some photos taken on the first trip and made into a video with music: Willis Fly By Air

Later in my tenure as S&B advisor, I helped shepherd a survey which was sent to past and present members. To my eye the results showed that many would appreciate less intervention by moderators which was perceived as censorship. Tony in particular did not agree with lessening the control. There had been a few examples of forum disagreements or feuds extending into Real Life wherein an upset reader would appear and confront another individual.  Since many people on the mountain own firearms, the concern by management was that someone would be injured or worse. Political topics usually were the worst although I eventually left the forum over its support of aerial spraying for gypsy moths, a potential health risk to area residents. One of my critiques of the practice was deleted by another moderator and when I complained to the Shannondale & Beyond Board of Directors, nothing of substance was done to remedy the situation.

If you are interested in seeing the information I presented, it is available for download on my file site: Foray 48B files.

Tony died around June 2014.  I have not been able to locate an online obituary and Willis went on Tuesday, January 3, 2017. They lived in the area of Shannondale on the Blue Ridge Mountain where Foray 48B spraying was done several times and while two deaths isn't proof, it is a coincidence that concerns me. Read the files and see if you agree that more investigation by public health is in order.
Posted by Chip Gallo at 1:20 PM No comments:

Routers In the News

Here at the Country Bunker high atop the Blue Ridge Mountains, we take our router responsibilities very seriously. Anyone reading this blog is undoubtedly doing so through one or more routers at the local level and then many more across their ISP's network, the upstream internet provider and so on. Modern, sophisticated routers make the worldwide web and internet possible. We are not talking about the kind of router that cuts wood, plastic or laminates, but rather this: Router (computing).

You may be thinking, "I don't need to read about no stinkin' routers." And "Doesn't my internet provider send a reliable, secure router when the service is installed?" Unfortunately, this is rarely the case as these companies are motivated by profitability and the bottom line. Robust security is expensive to maintain and technology moves at a rapid pace as does the potential threat environment. Companies usually provide equipment or agree to support a bring-your-own device that they can support for years and years; they are familiar with the "firmware" (software that runs the router) at a specific revision level and unauthorized updates in their eyes are unsupported when it comes time to troubleshoot a problem with your internet connection or voice-over-IP phone system. Some of them refuse to reveal the root user or administrative password to the end user and maintain control of settings and firmware level in that fashion.

Here we turn to the recent revelations concerning security breaches on hundreds of thousands of commercial routers across the internet, apparently perpetrated to demonstrate flaws in the router software. These are industrial-strength devices so imagine what has, can and could be done to the inexpensive garden variety ones used in most homes. Like most people, I had purchased a home router from the lowest cost source I could find, set it up quickly and then (mostly) forgot about it. I did think to change the default administrative password and name the wifi network something obscure. I disabled the guest network too. Every so often I would check for a firmware update but there hasn't been one from Netgear for this model in years, a common failing of mass market products. More recently I had trouble getting a networked music server to work and thought about upgrading to a router with business features and advanced configurations. Highly publicized router exploits were a strong motivation to upgrade as well. The one I settled on is manufactured by a company that specializes in wireless equipment, a Pepwave Surf SOHO purchased online from 3gstore.com. 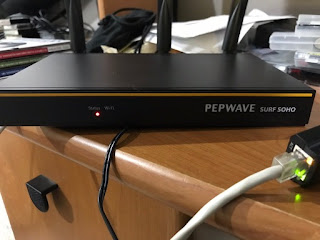 The installation took a couple of hours and nearly everything is back. That one hinky system has always been hard to configure so I will have to dig into the manual and figure it out. Used a Pepwave installation checklist with my own "secret sauce." Stay tuned for the gory details!
Posted by Chip Gallo at 10:51 AM No comments: